Yana Bystrova "Only the Healthy Will Survive" 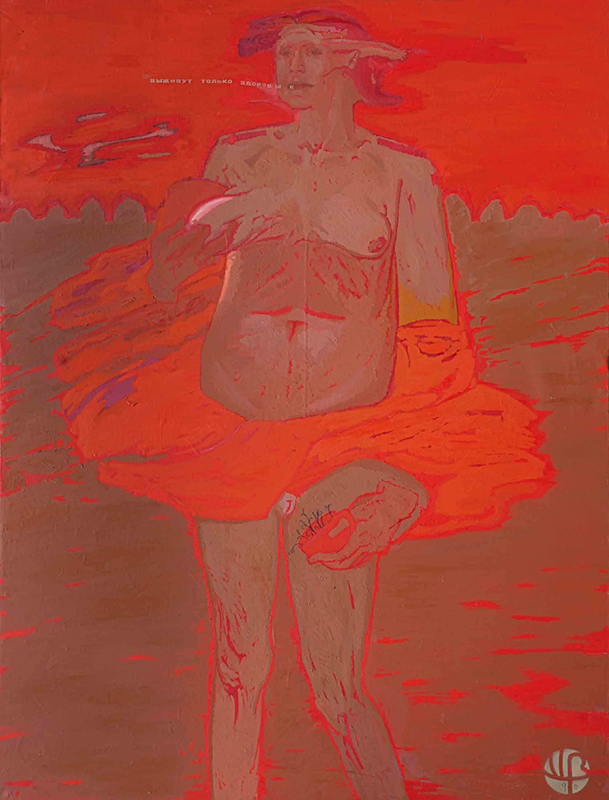 "Only the Healthy Will Survive" is ​​the last work created by Yana Bystrova before she left for permanent residence in France. The canvas was written some time after work in the famous Moscow squat at Furmanny Lane, according to the artist herself, in the "postfurmanny period". "Furmanny Lane" for its short existence in the late 80's - early 90's had become one of the symbols of the whole artistic generation and served as a kind of art laboratory, a melting pot, where the formation of many artists known today, among which, apart from Bystrova, were Konstantin "Vinni" Reunov, Marina Skugareva, Oleg Tistol (with whom Bystrova was a member of the "Volitional Edge of National Post-Eclectism" group), Russian artists Yuri Albert, Farid Bogdalov, Konstantin and Larisa Zvezdochetovs and others.

"Only the Healthy Will Survive" is a family portrait of Oleg Tistol and Marina Skugareva, whom Bystrova united into a single expressive androgynous image. The title of the work is a phrase by Konstantin "Vinni" Reunov, a colleague and then husband of the artist. She says that this phrase "is iconic for the moral and ethical relationships practiced then". Being made right after Furmanny, the picture retained the energy of exuberant creative and personal interaction, which is an indispensable and important aspect of life and work in the squat. Involuntarily associated with Soviet poster slogans and moralizing appeals, the work bears a touch of somewhat bitter post-totalitarian irony, with which abound not only works by artists of the "new wave", but also by many other artists during the perestroika period. The painting style indicates the period of its creation quite well, too: expressive, relaxed, somewhat grotesque, textured, with a rich color. The canvas glows in red, expression and excessive symbolism of which perform the work of a welcome baroque redundancy and simultaneously a disturbing sensation of an unknown threat - a cocktail of fluid transitional times.

A resonant and scandalous story is associated with this painting. After disappearing for a long time, the picture appeared at one of the Kyiv art auctions with a fake (as it turned out later) signature of the late artist Valentin Raevsky and was exhibited as his work. Oleg Tistol, who is well acquainted with the works of both Raevsky and Bystrova, saw the painting, doubted the authenticity of attribution and sent images of it to Bystrova. The assumption was confirmed and thus the real authorship of the painting was established.