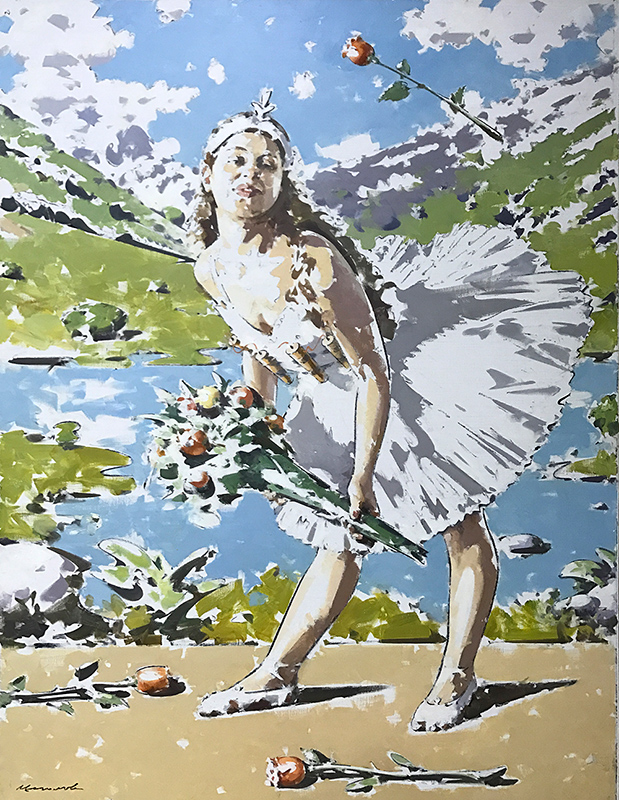 Vasyl Tsagolov challenges the individual and social vices with his irony and sarcasm. His work is acutely ironic, filled with black humor and mystification. The artist makes myths and reality collide in his works, constructs a system of critical perception, highlighting crucial points, revealing, dissecting and deconstructing them. Through this analytical-sarcastic prism, the artist looks at the problems of both local and global nature, depicting everything in a recognizable author's manner with a multitude of voids on the canvas, gaps in the picturesque surface, giving his paintings an effect of incompleteness.

The image of a ballerina is one of the central in the work of Vasyl Tsagolov. Depicting in his picturesque canvases the dancers against the backdrop of characteristic landscapes, the artist always brings a bit of absurd into the mix. Thus, he demonstrates his favorite artistic method, in which the real landscape turns into theatrical scenery, the people in it - into characters, and the action itself - into dramatization.

Especially famous is the image of a ballerina with a shahid belt and a Kalashnikov rifle in her hand, dedicated to the problem of the increased terrorist threat in the world. A ballerina with flowers from the "Success" at first glance seems to be the antipode of the "armed" one. Flowers as a symbol of beauty, tenderness, peace are antagonists of weapons, bringing death and destruction. But there is a catch. A young ballerina with flowers in an elegant, but at the same time somewhat vulgar pose, combines in her image purity and innocence with vulgarity and pragmatism, that are often related to public recognition. At the same time, flowers are a symbol of fragility, transience, and together with the image of a girl, like the Dutch "vanitas" still-lives, remind us of transience and ephemerality of glory, success, any earthly pleasures and life itself.