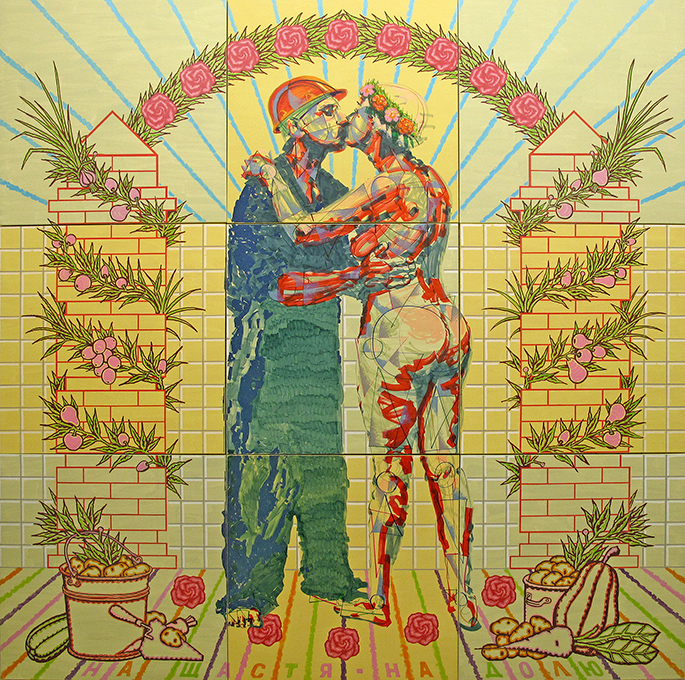 The "Natsprom" creative tandem, which united Oleg Tistol and Mykola Matsenko, arose in the early 1990's. In one of the manifestos, in which the ideological foundations of the artistic duet were based on a rather ironic form, the research of national stereotypes fixed in the subject environment was declared, as well as "the creation of a micromodel of Ukrainian culture in the European and world context".

Participants note that "Natsprom" is not so much an association as an ideologically artistic program, in which the creativity of both artists in one way or another unfolds even when creating solo projects.
The artists offer several different interpretations for the name "Natsprom": "national crafts", "national industry", "national promotion", etc. "Natsprom" art is an artistic research, the hypothetical result of which is seen as the creation of branded art products that synthesize the specificity of national culture and represent it in a global context.

During the 90's - early 2000's the duo realized numerous pictorial, photo and installation projects in which Ukrainian history and mythology were reflected, including key stereotypes and important questions posed by the time (“Ataturk Museum”, “September 17”, “Museum of Architecture”, “Museum Ukraine”, “Mother of Cities", "Made in Ukr", etc.). The names of the projects themselves illustrate the problem of fixing, archiving, preserving the historical heritage, but also the need to analyze and update the cultural space.

In 2013, the artists created a joint monumental canvas "Forever Together", where each one brought his achievements and style of the last creative period. The picturesque expression of Tistol, along with the "cubist" style worked out in recent years, harmoniously combines with the interlacing of Matsenko’s honed "heraldic" graphics. The work is remarkable for the extraordinary discovery of solutions and techniques, co-authors successfully supplement each other in it, and regularity and expressiveness are balanced in the best possible way.

This work to a certain extent is an appeal to the past projects of "Natsprom", which have already become iconic. A couple in a kiss is a visual quotation from the 90s production photo for the "From a Family Album" exhibition. Mykola Matsenko and Marina Skugareva posed for the picture, ironically depicting a couple in love. Later this image was used in the metal installation "Forever Together" from the "Museum of Architecture" project, which became the prototype for the work of 2013, and in the painting "Hey, Slavs!". The theme of love and unity, ironically, but sensuously embodied in the image of a couple in a kiss, is a leitmotiv in all the joint work of the artists. They chose this image as one of the key stereotypes associated with the romantic side of Ukrainian culture, worthy of artistic comprehension, global and "national promotion".